SOME buzzkills will insist on calling Bon Jovi a “guilty pleasure”. It’s definitely time to drop the guilty – this is good, innocent fun, consummate musicianship packaged up in rollicking showmanship.

Last night, under a breezy, overcast sky more suited to their native New Jersey, the veteran band took the stage at Suncorp Stadium and reminded Brisbane why the genre they helped define is still called “arena rock”.

With the crowd ably warmed up by Perth alt-rockers Birds of Tokyo – who finish on their mega-hit Lanterns as the arena blazes with mobile phone torches – Jon Bon Jovi and his comrades unleashed an epic set list of more than 20 songs bouncing around their various eras since forming in 1983.

First song out of the gate was 1986 classic You Give Love a Bad Name, followed by Raise Your Hands, harking right back to the band’s early years and setting the high-energy pace for the night. When the opening bars chug from Phil X’s guitar, you know this is what everyone came here for. Lost Highway, the title track from their 2007 album, slips things into a more countrified gear as the band ease into the gig.

The tour is named for their most recent (and 13th) album – 2016’s This House Is Not For Sale – and there’s a generous helping of songs from that collection in the mix. But there’s also a string of hits from the band’s superstardom heyday, the late 80s and early 90s – the albums New Jersey Slippery When Wet, and Keep the Faith are very well represented.

It’s hard to imagine any of these chunky rock tracks – Bad Medicine, Lay Your Hands on Me with its gospel twist, fist-pumper Keep the Faith and the like – being played in a venue any smaller than the stadium. This epic setting seems a far cry from the teenage Jon Bongiovi’s first professional recording credit – singing Merry Christmas to R2-D2 on an obscure, odd and festive Star Wars disc laid down at his uncle’s New York recording studio in 1980.

The show tonight harks right back to those days, with an appearance by Runaway – the song Jon was hawking as a demo at the time, trying to break in to the industry, and the nascent band’s first-ever single. You can see why it opened doors – three-and-a-half decades later, the three-and-a-half-minute rock song remains a banger.

At 56, Jon still enjoys himself on stage like that cocky teenager, belting out the tunes he knows are tried-and-tested platinum-sellers with an unwaning enthusiasm and a fine line in vintage rock ‘n’ roll theatrics. His charismatic performance completely carries the day, even in the few moments when his voice can’t quite keep the breathless pace it set in the ‘80s. 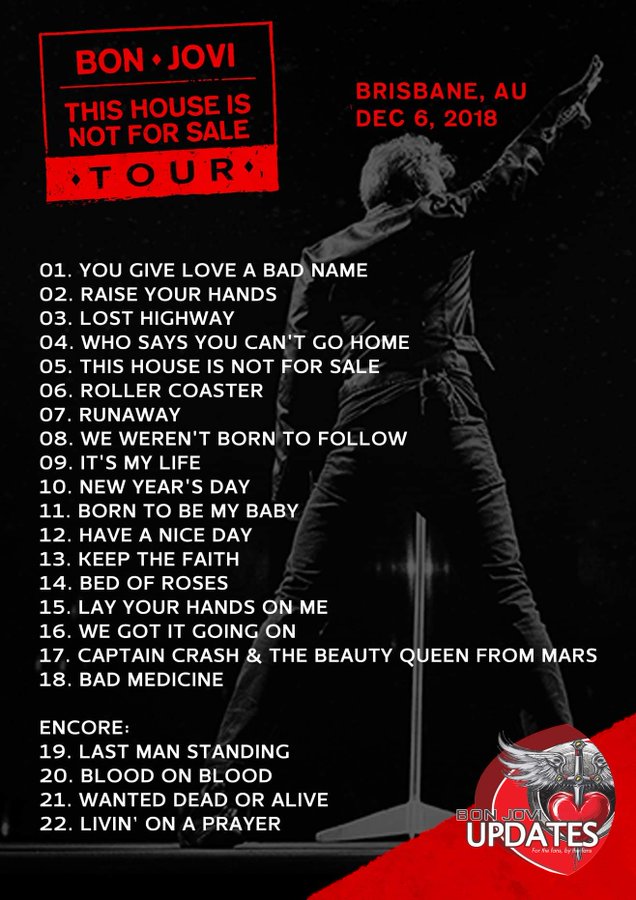 39 people are talking about this
He descends into the crowd for fist-bumps, high fives and kisses during Born to Be Your Baby, to the front row’s delight.

The frontman is, of course, backed by a strong engine room in original piston-armed drummer Tico Torres, and keyboardist David Bryan. Bassist Hugh McDonald has also been there since day one, and the decades of experience playing together has made these men a tight-knit bunch.

Longtime guitarist Richie Sambora has been swapped out, as of a few years ago, for new boy Phil X, who’s integrated perfectly, not simply aping Sambora’s riffs, but adding his own flourishes – everyone gets a solo on Keep the Faith, and X’s is a face-melter.

After decades together, the old guard still love playing these songs, and it shows in every shared nod and smile.

A few notable absences from the main set drop some hints as to what the encore will hold, and sure enough, the band close strong with a hit-stacked coda including Slippery When Wet’s signature outlaw anthem Wanted Dead Or Alive, and the band’s bread-and-butter classic Livin’ On A Prayer, prompting an epic singalong. It’s a song that sums up Bon Jovi’s ageless appeal, echoing Springsteen or Barnesy with its lyrics of longing to escape a dead-end, working-class, hardscrabble life.

With that, the Brisbane crowd melts off into the Thursday night, no doubt reminded that the alarm clock will be ringing on Friday morning – and no doubt inspired, like Tommy and Gina, to imagine the day when they can follow their dreams and stick it to The Man.